a tribute to the life of Isaac Waller

Go thy way, sell whatsoever thou hast, and give to the poor, and thou shalt have treasure in heaven: and come, take up the cross, and follow me” (Mark 10:21).

Turning away with Jesus’ words still ringing in his ears, the rich young ruler left with a sorrow that revealed the cherished treasure of his heart. The laying down of his riches to follow Christ was a decision that he was not yet ready to make. 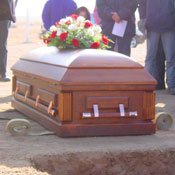 Possibly the first American missionary to be buried in Mongolia, Isaac’s burial was a powerful testimony of love for the people of this nation.

Three months ago, I stood with tears in my eyes on a barren hill in Mongolia where my beloved twin brother’s body lay in a casket at the bottom of a hand-dug grave. My tears were not of regret, but of joy in witnessing the testimony of one who had forsaken this world’s treasures to follow Christ. On November 4, 2005, Isaac’s earthly race had finished, leaving us to ponder the twenty-five years that he had run beside us.

Born in Minnesota in 1980, Isaac and I both trusted Christ as our Savior at age five in Sunday school. We would be the first of 10 children in the Waller family. In a courageous step of commitment, my parents brought Isaac and I home from first grade and began educating us at home to protect us from damaging influences in the public school system.

Our growing-up years were filled with many joys and excitement as the TV and fiction books were replaced by creative projects and more profitable reading material. Milk carton rafts, giant kites, bicycle horses and stagecoach, and a twelve-foot model airplane powered by a lawn mower engine were just a few of the projects we did together. 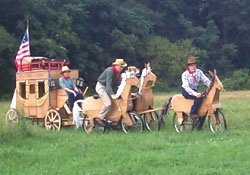 Designing and distributing a Gospel tract to accompany our stagecoach theme, our family took part in a local parade.

A quiet and gentle brother, Isaac’s personal disciplines deepened in his early teens, and he kept a consistent journal until his death. Rising early, often at 3:45 a.m., Isaac spent several hours in Bible reading and prayer each day. Taking a special interest in his younger brothers, Isaac worked to develop deep relationships with them and memorize Scripture together.

Although I was fifteen minutes older than Isaac, I often looked up to him and admired his wisdom and maturity. The disciplines he maintained in secret brought forth fruit that we could not help noticing. His quiet example and genuine love deeply impacted each one in our family.

Proverbs tells us that a man who is diligent in his business will stand before kings. We saw this lived out before us in Isaac’s life when he began working as an AutoCAD drafter at the company that my Dad worked for in Washington DC. Beginning in an entry-level position, Isaac quickly became the head draftsman and an indispensable part of the office.

David, Matthew, and Isaac enjoy a happy moment together at Christmastime.

When our family moved across the country to a farm in Wisconsin, 21-year-old Isaac faced a decision. The company vice-president urged Isaac to consider staying behind. They offered to help him find housing, and if it was a matter of money, he could just name what he wanted to be earning for his position.

Graciously declining the offer, Isaac turned away from the riches, status, and independence of this position to be with our family as we moved into a rugged 120-year-old farmhouse.

Again turning away from lucrative career possibilities, Isaac went on to serve with the Character Training Institute in Oklahoma City, bringing principles of character to needy lives in public schools and businesses. More than just a knowledge of character, people saw in Isaac the power of God’s grace to live out genuine character.

As before, Isaac’s diligence and responsibility also came to the attention of the leadership in Oklahoma. Soon he was responsible for setting up the audio-visual equipment for conferences, leading the weekly hymn sing, assisting with staff transportation, discipleship, and accountability with the young men from the training center, along with many other responsibilities. These tasks were fulfilled in addition to his primary job of assisting John Burnett, director of the International Association of Character Cities.

“Be ye steadfast, unmovable, always abounding in the work of the Lord, forasmuch as ye know that your labour is not in vain in the Lord” (I Corinthians 15:58), Isaac’s life verse.

In June of 2005, God opened the way for the fulfillment of a dream that my parents have had since they were first married. The Lord used the many years of waiting to uniquely prepare us for more effective ministry as we went overseas to serve together as a family.

Joining a small team of staff at a branch office of the Character Training Institute in Ulaanbaatar, Mongolia, our family launched into a new season of ministry together. Although we were usually swamped by requests for character training while maintaining a full schedule, these first months in Mongolia were an exciting time.

Applying his usual diligence to the tasks before him, Isaac assisted with weekly character and English training sessions, and used his desktop publishing skills to design additional materials for our character training. How little did any of us realize at the time that Isaac’s life of service was drawing to a close. 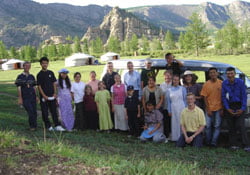 Our team pauses for a picture while visiting a Mongolian family in the countryside.

In early October, Isaac began to experience some pain in his left leg. The apparent infection strangely did not seem to respond to antibiotics. Missionary doctors from Korea and America, working with local doctors, were puzzled by the symptoms that continued to linger on.

Although the pain in his leg confined Isaac to his bed for most of the month, his joyful spirit was a constant encouragement to David, Derrick, and I as we shared a room together. Isaac took the opportunity to read through several missionary biographies during this time, even building a suspended glass shelf above his head for easier reading.

After several weeks in bed, it seemed that Isaac was getting better. Then he suddenly became much worse. On November 3, more blood tests revealed an extremely serious situation, and we were advised to fly Isaac to Korea or China immediately for further testing and diagnosis.

Isaac looks up with a smile from his reading in the biography of John Paton.

The following two hours were a blur of activity. We found a flight to Korea that was leaving in 50 minutes, hastily packed a few bags, and carried Isaac down five flights of stairs to a waiting taxi. As weak as he was, I still clearly remember Isaac’s smile as we joined hands for the last time through the taxi window. “We’ll see you!” were the last words I said to him as I squeezed his hand.

It was about an hour into the flight to Korea, after watching the setting sun from the airplane window, that Isaac suffered a massive brain hemorrhage and he joined his Savior in that City where the sun never sets.

At 1:30 the next morning, we received the call from our parents in Korea. Gathering in our apartment, my siblings and I wept and prayed together. Mingled with the sorrow of parting was joy and gratefulness for the twenty-five years that we had been privileged to have Isaac as part of our family. There, at the Throne of Grace, we found grace to help in our time of need. 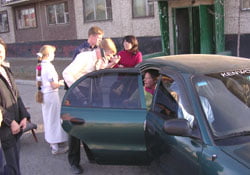 David covers some final details before the taxi races off to make the flight.

Over the next several days we experienced an overwhelming outpouring of God’s grace. My parents in Korea and my siblings and I in Mongolia were surrounded by the love and prayers of Christians around the world. Friends in Mongolia and Korea came along side us to help in any way they could as we prepared for the funeral.

Talking it over as a family, we chose to bury Isaac’s body in Mongolia, the land where he had so selflessly poured out the last months of his life. Hundreds came to the viewing and funeral where we boldly proclaimed the message of joy and confidence that we have as Christians. We will see our brother and son again!

We later learned that an extremely aggressive and rare form of leukemia had caused Isaac’s unexpected illness. Even in the best of hospitals, there is little that anyone could have done to help him. God in His great love and wisdom allowed our family to spend these last months serving together in Mongolia, and gave Isaac the opportunity to perhaps impact more people through his death than he had in his life. 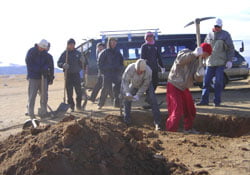 Like a corn of wheat falling into the ground, Isaac’s life bore fruit because he was willing to die. He was willing to die to the pleasures of this life so that he could invest in an eternal reward that could never be taken away. Unlike the rich young ruler, Isaac’s life was focused on eternal things. Faithful unto death, he won the crown of righteousness which the Lord has promised to them that love Him.

I find a challenging message as I ponder the first verses of Hebrews 12. Now that Isaac has joined the great cloud of witnesses who have gone before us, let us make sure our calling, let us lay aside every weight, let us run the race that God has set before each one of us. Let us fix our eyes upon Jesus, Who with the same eternal perspective saw not the cross, but the joy set before Him. (See Hebrews 12:1–2.) 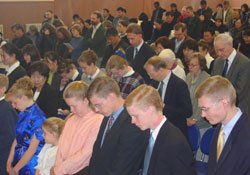 Many friends, missionaries, and students from our classes joined us for Isaac’s funeral service in Ulaanbaatar.

After a time with family and friends in the States, our family returned to Mongolia with renewed vision and a deepening message to continue the work set before us. Around us we see new fruit springing forth, reminding us of the promise that we will doubtless come again rejoicing, bringing our sheaves with us. (See Psalm 126:5–6.)

May Isaac’s testimony be an enduring inspiration to live for eternity, where the trials of this life are not worthy to be compared to the glories that will be revealed at the appearing of Jesus Christ. 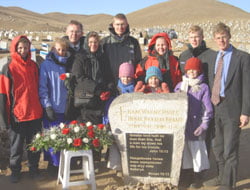 After the burial, our family gathered around Isaac’s gravestone to sing “God Is So Good” in Mongolian.

← A Wild Ride of Faith

Adam Waller served with his family in Ulaanbaatar, Mongolia. The Home going of his twin brother Isaac in November of 2005 gave him and his family new opportunities to testify of God’s love and faithfulness. Following a clear calling to overseas mission work, Adam’s desire is to use the skills the Lord has given to him to make God’s ways known among the nations.